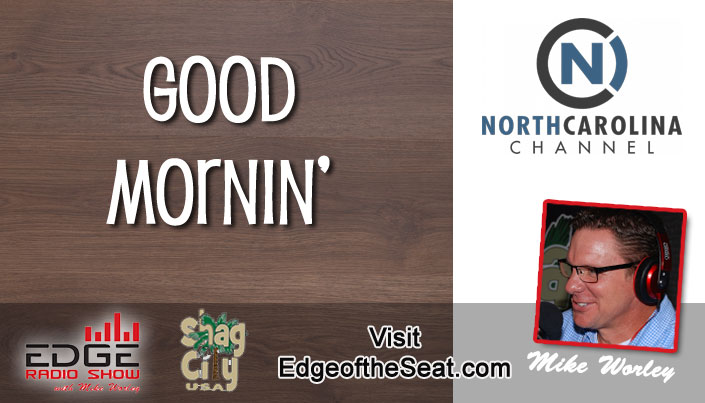 It is beautiful outside! Happy Monday to you! We had a great weekend that kicked off Friday Night with the Edge Music Series in Carolina Beach. Thanks so much to all the attended. We especially want to thank the corporate sponsors and Patron VIP Sponsors that have helped make this series happen. Jim Quick & Coastline did an incredible job. We look forward to next month. The Martin Davis Band featuring Jackie Gore and Big John Thompson will be coming to the SeaWitch Tiki Bar on May 6th. This will be the first time these guys have played together on stage in Carolina Beach since the 60’s. A lot of Embers fans have been buzzing with the news ever since these guys were scheduled and announced to be playing on the series.

We have another great show planned today. Tune in to The Edge Radio Show on Shag City USA for another 3 hours of the best music in the world.

Monday Edition of The Edge Radio Show plays 9 to 12

Beach Fest at The Farm – This Saturday – get tickets now at BeachMusicParty.com
2016 Hair on Main Salt Air Jam presented by Shag City USA and Gentry Air is May 13th, 2016 – order tickets now

Did you notice the North Carolina Channel Logo above?

The Bands of the Sand features the top beach music performers, every Sunday night at 8pm, beginning May 1st on The North Carolina Channel. This season’s bands include: The Band of Oz, The Embers featuring Craig Woolard, Blackwater Rhythm & Blues Band, Steve Owens & Summertime, Jim Quick & Coastline, Carolina Breakers, Fantastic Shakers, North Tower & Envision. The Edge Radio Show is proud to partner with The North Carolina Channel to keep beach music strong while broadcasting from Murphy to Manteo and Myrtle Beach to Norfolk. Bands of the Sand will air Sundays at 8 pm on The North Carolina over-the-air and on Time Warner Cable channel 1276.
..